This week marked the beginning of my second week in Mumbai, slowly and gradually I have started to feel more at home here. Don’t get me wrong I still feel out of my comfort zone 80% of the time, but one thing that makes me forget that I am in a new city, half way across the world, is how friendly and welcoming the students I have been visiting as part of Toybanks play sessions are. 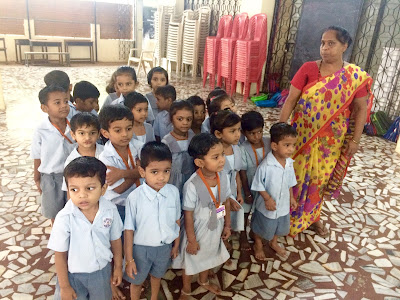 On Tuesday 12th September, 2017 I attended my first pre-primary play session at a school in Borivali with Toybank field officer Caswina and volunteer Shweta, a 20 year old Indian student. Thinking I knew what to expect having visited a school in Malad the previous week the younger age group of students meant I faced an entirely different and often more challenging set of problems.

Once again the biggest obstacle I faced was language. Unlike the school in Malad, in which the play sessions were for older students these pre-primary aged children didn’t speak any English and neither did the teachers. In fact even my fellow volunteer, who is Indian, said she struggled to understand as she didn’t speak much Marathi only Hindi. As a result I found it quite difficult to communicate with the children. 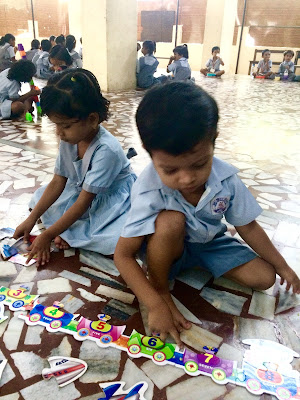 Nonetheless, the children seemed to thoroughly enjoy the play session led by Caswina. First of all, the students all sat around in a circle and were instructed to close their eyes and hold their hands in a certain way, such as clenching their fists. Games such as these allow the children to develop both their physical and cognitive skills, skills that help further child development. After this, we split the class of 20-25 students into teams of 4 and handed out a selection of games. All the games distributed to the students were aimed at improving their physical and cognitive skills, skills that are so important to develop at an early age. The children had the option to play with skittles, a mini cricket set, building blocks and jigsaw puzzles amongst other games.

I spent a significant amount of time helping a group of students with a jigsaw puzzle. Initially they struggled in connecting the right pieces instead just forcefully joining random pieces together. However, I realised that if I connected them first and showed them what the completed puzzle should look like then once I had taken it apart they were much better at completing the jigsaw with a lot less help. 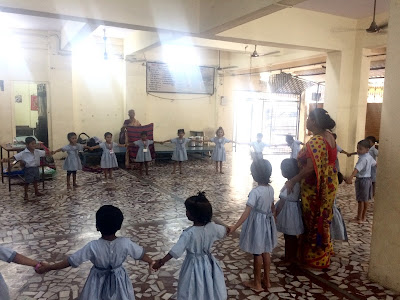 One of the main things these play sessions are teaching me is how to communicate despite lacking a common language. Still, the most difficult aspect of the play session was when the students asked me questions I wasn’t able to respond. As they found it difficult to understand that I didn’t speak the same language they would continue to look at me expectantly waiting a response to their question, which I wasn’t able to answer.  Nonetheless, by the end of the play session even children who appeared shy and reluctant to begin with were happy and smiling.
No matter what struggles these children faced in the rest of their day at least for that one hour they got to have fun, whilst also developing fundamental skills that aid child development.