From Wednesday 20th September to Friday 22nd September Kids India, a B2B international trade fair by Spielwarenmesse eG held for members of the toy industry took place. The annual event, which took place over 3 days allowed approximately 150 distributors from all over the world to display their products.

Not only did Kids India provide an amazing opportunity to raise awareness of Toybank and their work but created an occasion for Toybank to approach exhibitors at the event to see if there was the potential for sponsorship, donation or reduced price products. From soft toys, wooden toys and educational board games to model construction, outdoor activities and children’s books every type of toy or game that you could possibly imagine was exhibited at the event.
Throughout the exhibition Kids India conducted panel discussions with leading figures in the industry, Toybank’s founder Shweta Chari was a panellist for the discussion on the Value of Play. As well as Shweta, there was an individual from Hong Kong who owned a commercial company selling toys for autistic children and two professors, including the head of the Indian section of the IPA (International Play Association). The seminar was particularly interesting in learning about how different individuals approach and perceive play.

From the outset the panel discussion established that the medium of play is vital for a child’s development, it was agreed that play is intrinsic in improving children’s inter-personal, physical and cognitive skills. This is a belief that is fundamental to Toybank’s work, underpinning everything that they do and an ideal we strongly believe in. The seminar discussion also highlighted that play is also central for the improvement of a child’s inter-personal skills and can in fact reduce violence amongst children. Moreover, through play sessions, such as those conducted by Toybank, it can improve school attendance and reduce dropout rates
One panelist also stressed that through the use of educational games it was possible to remove a child’s fear of a certain academic subject. For example, if a student were to have approached a mathematical problem through a game in a fun and relaxed setting their panic at dealing with a similar problem in a normal classroom environment may be diminished and perhaps even eradicated.

Although a couple of panelists veered off topic discussing and often critiquing the role of parents in play rather than the value of play for children themselves, the seminar was eye-opening in helping to understand the problems with regard to how play is perceived across India. It became clear that play in India is not given the importance it deserves, particularly for the under-privileged, despite the many benefits it offers. 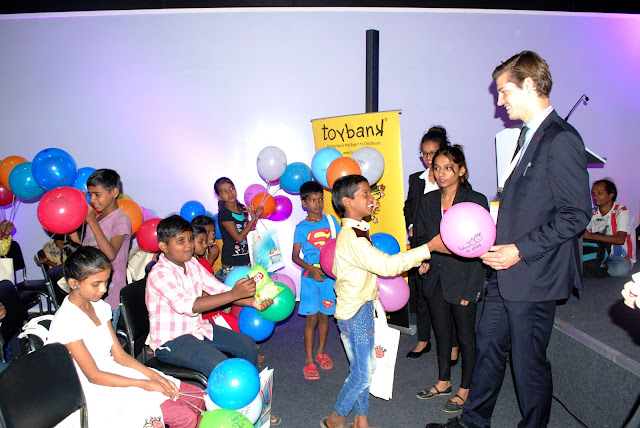 Following the panel discussion 25 students from Yuva School, Bombay were invited to the Kids India event. On their arrival balloons and goodie bags were given to each student, the excitement and smiles on their faces was the best and most rewarding part of the day. After some music, which gradually made the children more and more hyper a toy was distributed to each child. From this activity, we hope that the pure joy on these children’s faces allowed the companies at the Kids India event to witness the truly magical moments Toybank’s distribution work can achieve. 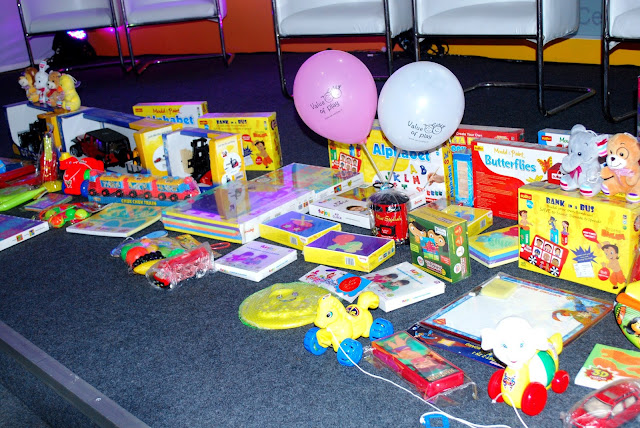 Toybank were grateful to have been able to participate and experience the Kids India event for a second year. We hope that the event helped spread the awareness that every child, no matter their background, deserves the right to play.