As my time here at Toybank continues and with every play session I attend I have come to learn that each and every experience I have will be different and unique in its own way. On Wednesday 13th September I attended two sessions at Pragati School, Borivali with field officer Caswina, one session for primary children and the other for secondary.
In contrast to my previous play sessions this school appeared much more established, with better equipped classrooms and walls covered with posters. Additionally, unlike my previous sessions the teachers were more involved in helping the students with the games. I found the day’s sessions particularly interesting to participate in as Caswina told me the theme for her sessions was empathy. It was eye-opening to me how she was able to teach such a complex emotion, which many adults find hard to grasp, to young children. Empathy is so important for individuals to learn as it allows them to place themselves in somebody else’s shoes and identify with another’s feelings and emotions.
Empathy is integral in developing a child’s emotional intelligence, which is why it is so beneficial that Toybank uses is as one of the themes for their play sessions. The premise of Caswina’s icebreaker was to encourage the students to understand one another’s similarities and differences and that everybody is unique and different. A principle which in turn helps evoke and develop a child’s ability to empathise with another. 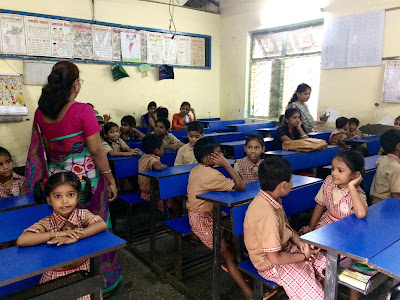 For the activity the children were split into pairs and given the task of discussing their similarities and differences. After having talked between themselves for 5 minutes, a child from each pair then stood up and told the class three similarities and three differences between them and their partner. For instance, unsurprisingly two boys both loved cricket yet one liked dancing and the other didn’t. This encouraged the students to appreciate that even between friends we all have differences. Ultimately it teaching them that we are all unique. 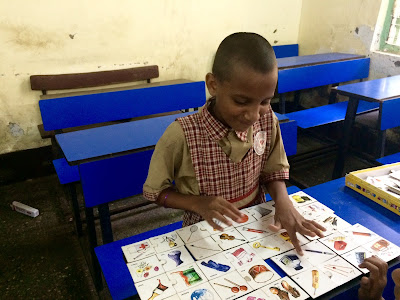 Following the icebreakers we then played board games, which varied between the two sessions as the first session was for primary children and the second for older secondary children. I found the primary school games easier to play with the children as they often took less explaining so were simpler to communicate. There was one girl who was playing with a jigsaw where different English words could be paired up, such as ‘pencil’ and ‘sharpener’ I was amazed at how quickly she completed it and how when I asked her what the words were she was able to pronounce and say them. 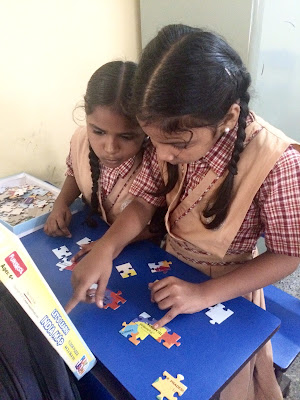 Similarly, the selection of secondary games also included a jigsaw, however it was little more complex. The jigsaw was a complete map of India, initially the students didn’t quite know where to start as there was quite a few pieces and a complicated pattern. However I taught them to look at the final image of the jigsaw on the box and use that to help them connect the pieces together - a tactic I always used as a child! By the end of the session they had almost completed the jigsaw and in turn developed their geography and puzzle skills.
In between the sessions Caswina went through the games and counted how many of each type of game there was, from general games and logic games to numerical and word games. This alongside the empathy themed icebreakers really made me realise how through play these children are able to learn and develop not only their education but also invaluable life skills. With every play session I attend, the importance of Toybanks work becomes more and more evident to me.
- Lucy Wray, UK Toybank Intern
Email Post
Labels: Activities Board Games Borivali Caswina Empathy Play session UK Intern Volunteer