Attending my first play session with Toybank was an eye-opening experience. It made me realise quite how lucky and privileged I have been throughout my life. On Wednesday 6th September I attended four sessions at the Hindi BMC School, Malad a lesser privileged area of Mumbai. I arrived at the school not knowing what to expect, how the students would react to me and whether or not I would be able to communicate effectively with them due to the language barrier – suffice it to say I was nervous!
My first shock came with the school itself, much like everything I have come across in India so far, (I am a University graduate from the UK interning at Toybank during September),  it was completely different to anything I have ever known.  Although the school at first glance was in a lot poorer condition than I am accustomed to the children whilst they were there seemed genuinely happy and were never short of a smile. 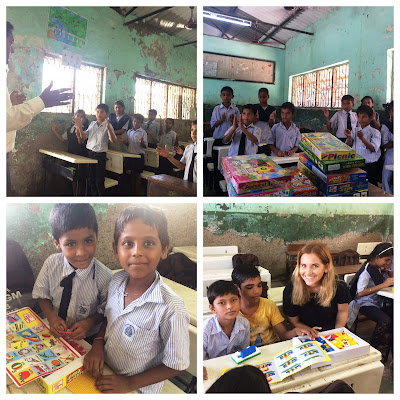 The first play session of the day I attended was for primary children. The session started with a few icebreakers led by one of Toybank’s field officers Laxman. Despite the language barrier, I established that the icebreaker was a ‘copy the action’ game, which definitely had all the children 100% engaged and excited to play. Laxman then went around the room and asked each student to introduce themselves with an accompanying action of their choice. Although many of the students were perhaps nervous or shy and opted for the same action as one another, despite Laxman encouraging otherwise, by the end of the icebreaker the children were much more at ease. 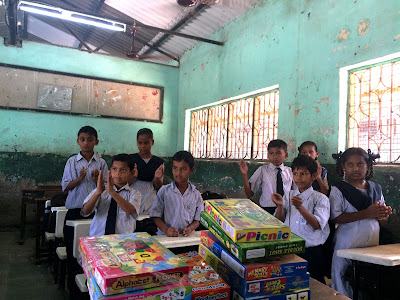 After the icebreakers were over was when the real fun began, with the remaining 40 minutes of the session being dedicated to playing with the ample supply of board games. There were spelling and word games, maths games, lego building games and even the classic Picnic. Whilst I did find it quite tricky to explain the more complicated games to the students because of the language barrier and had to ask Laxman to get them started, the children amazed me at how quick they were to pick them up. Despite facing some difficulties with the more complex games, the simpler maths and spelling games I found much easier to communicate with gestures and examples. 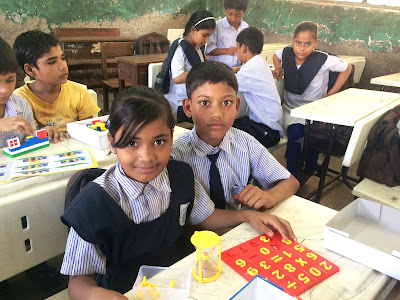 During the play session Toybank’s ethos and motivation to ‘build strong children rather than repair broken men,’ became clear to me. It was evident that the building  games helped the children with physical skills, the word games helped them with their English, which was already 10 times better than I was expecting and games like Picnic taught the children how to deal with money.
Clearly the work Toybank do is invaluable, they are educating these children through the medium of play and teaching them valuable skills that will benefit them in later life. First and foremost for the hour that these children were playing with these games, they seemed genuinely happy. If we are able to provide these children less privileged than ourselves with even an hour of an escape from the troubles of their lives, we should.
- Lucy Wray, UK Toybank Intern
Email Post
Labels: Activities Board Games Hindi BMC School Malad Play session UK Intern Volunteer