18 Toybankers eagerly awaited in UPG College on a Tuesday morning to welcome 200 children from Asha Kiran.

The children had a ball of a time in the Toybank Summer Bash! They were engaged in various activities from Origami to games, etc. They all were shown a fun movie – ‘Krish, Trish & Baltiboy’ which was sponsored by The Children’s Film Society India.
The event started at 9.30am, the children in both the classes were told about 3 core rules for the day:
Both the classes were filled with 100 children each! The event unfolded with the origami session in both the classes. One class was taught to make a rotating toy – ‘Flexagon’, and the other class was taught how to make a ‘Star Frisbee’. 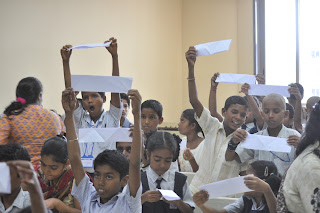 In each of the classroom there were 8-10 volunteers helping out children to fold the papers and follow the instructor. At the end most of the children got the final toy made by themselves, and started helping their peers make the toy for themselves. 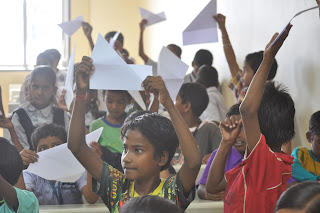 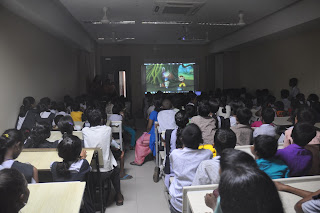 After the break Toybank screened a movie for all the 200 children gathered at UPG College.  The children enjoyed the movie – ‘Krish, Trish & Baltiboy’. The movie went on for around 1hour and 10 minutes. The movie DVD was sponsored by The Children’s Film Society India.
Volunteer stirred a discussion with the children in both the classes after the movie. Here are some of the responses from the children who saw the movie:
After the discussion of the movie, the children were served lunch, later we had a short interaction with the children, and some of them promised to give a written feedback about their experience of the day and the learning’s from the movie they has seen!

The NGO bus arrived at around 2pm to pick-up the kids from the College. The children went home very happy with smiles on their faces and a new toy made by them in their hands!

We thank Children Film Society India for lending us a copy of the DVD of Krish, Trish and Baltiboy.

We also thank Usha Pravin Gandhi College for letting us use their infrastructure for this event!

Toybank would also like to appreciate all the volunteers who attended this event and helped us execute the event smoothly.

Check out more pics of the event here!