What seems to be the largest alliance and networking between the country’s CSR and NGO communities, NGO India 2012 serves to deepen the understanding of key issue in areas such as health, livelihood, environment, education, disaster response and empowerment.

Toybankers- Shweta Chari, Indranil, Deepa, Durga and Niraj – attended this year’s conference hosted at the epicentre, Gurgaon, from the 16th till the 18th of March. 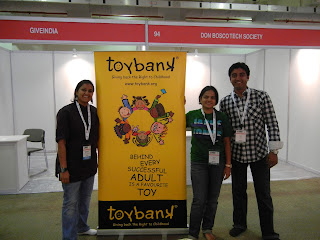 The event was supported by prominent institutions such as Guidestar India, Oxfam, The National Trust and FICCI and hosted stalls from close to 150 NGOs and foundations.NGO India 2012 included a 2 day conference and on the last day, the NGOs put up stalls and had an exhibition.

Indranil Mukherjee, who has always been very closely involved with Toybank , never expected the event to be on such a large scale. He was in-charge of the Toybank stall. It was his first experience and he enjoyed meeting other NGOs and learning about what they did. When asked about what he felt about the response to Toybanks stall, he said there was a large turnout and people liked the whole concept of Toybank. He also had a good time before the event working with other volunteers to make the items for the stall. Proud of being a Toybanker, Indranil thought the message of Toybank was well put forth and he is waiting for what next years NGO India has in store for him. 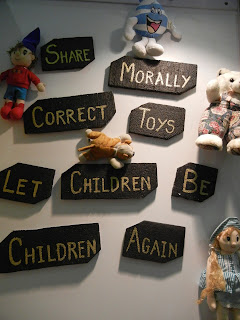 Along with Indranil, Niraj Ramjiyani was at the event. When asked why he volunteered for Toybank at the NGO India event, he said he would do anything for Toybank, even if it involved going all the way to Delhi! He also was impressed by the volumes of people and the number of NGOs present. He took a keen interest in going around and seeing the other stalls, understanding the different challenges they were dealing with and about their work.

While the men were busy soft selling Toybank merchandise at the stall, Shweta Chari and Deepa Kukreja were conference hopping. There were many talks worth attending. To mention a few, Nisha Agarwal, Chief Executive Officer  of Oxfam India, spoke on the Role of NGOs in delivering Inclusive and Sustainable Development. She emphasized on incorporating greater accountability and better utilization of resources in routine functioning and encouraging effective integration of people and social organizations to bridge the demand-supply gap in society. 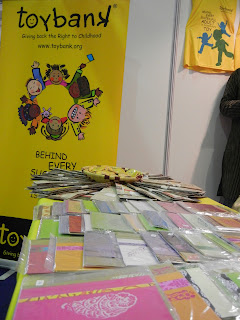 Anita Sharad, General Manager for Resource Mobilization at Child Rights and You (CRY), addressed child rights through a holistic lens. She questioned what the root cause of issues that restrain the rights of children were. Mobilizing communities to work towards the progressive development of children and ensuring actual implementation of relevant laws and policies that guarantee child rights, is what Anita Sharad proposed. Anshu Gupta, the Founder-Director  of GOONJ, gave an impressive opening remark.

NGO India 2012 was all in all a great exposure for Toybank and its volunteers.

Kudos to Guidestar and UBM for hosting such a lovely event!