We are limited only by our own imagination. Who would have thought a game like Snakes & Ladders could be used to teach various other things to children?

Make way for Manipulative Training! Anu Advani — a teacher from Brooklyn, US — introduced Toybank’s Program Officers(POs) to unique ways of playing. During this cross-learning session, she shared ‘manipulative’ techniques she applied in her teaching and how she uses Play as a pedagogy. Alongside, the POs shared how Play is used in their profession as a Program Officer which reinforced the Power of Play for Anu.

During the session, Anu asked the POs about how they would use Snakes & Ladders (a game ideally designed for age 8 and above) with all age groups pre-primary, primary and secondary. She encouraged them to think inventively and give their different inputs. Through this, the idea of manipulating an existing game to cater to the children being engaged was established. 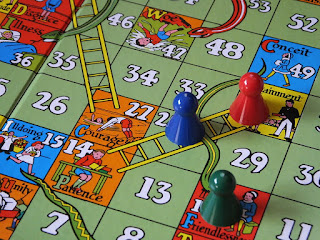 Snakes & Ladder for the pre-primary section could be used to teach them two prime elements — numbers up to 20 and colors. For the primary section, Anu recommended using two dices instead of one and ask the children to add and subtract the two numbers to move ahead on the board. Similarly, for the secondary section, multiply or divide the numbers.

In the above example, the extra die added to the game was the manipulative part to make the game more interesting. In the same manner, discarded game coins, dice with colors, Tangram pieces and so on can be used to make any game interesting, engaging and curated to children of various developmental and learning levels.

Anu also conducted a Team Building activity where she provided straws, index cards, hand cream, tape and a pair of scissors to the teams and asked them to make the tallest structure that can stand without any support. Two minutes were given for the team to discuss strategies and approaches of constructing the tallest structure. Post which, 10 minutes were allocated to make it.

Each team had a unique solution, no two groups made the same thing. There was a clear team effort. 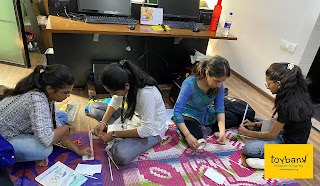 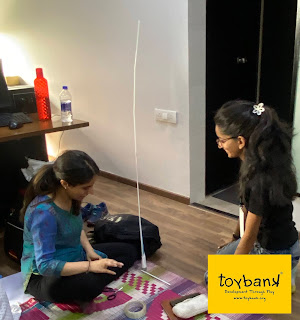 After a fun learning session, Anu promised to come back to India for another workshop, with games relevant to the children in India through which she will demonstrate the magic of manipulation. She also suggested that each PO identifies two games and figures ways to use it for all sections of children and try to find manipulatives to enhance them. We can’t wait for the session, which will be a powerhouse of learning!