Toybankers had a good time cheering for Toybank at The Mumbai Cyclothon, held on 24th April 2011 at Bandra Kurla Complex, Mumbai. 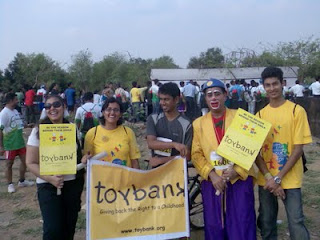 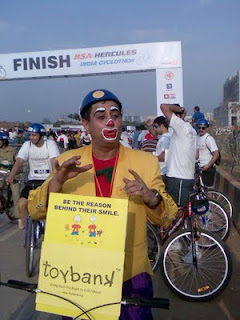 Here’s what Jaspreet has to say about the event:

“The Mumbai leg of Indian Cyclothon was held on 24th April 2011 at BKC in Mumbai. The cyclothon started at around 6.30 am in the morning. The Toybank team was present in full force. The other members included Pravin- 'Happy Toybanker', his son Malhar, Nitesh who had come for this event from Goa all the way, Deepa and Jaspreet Singh.

The 'Happy Toybanker' was at his animated best and also cycled to get support for Toybank. He met up with the Army Jawans and posed for photographs.

At the end of the Cyclothon, Toybank was also interviewed by Red 93.5FM and the RJ said that he will play the recording on air. The RJ recorded comments of the Toybank team on the recorder.

We also gave stickers and spread the message around for Toybank, including the Mumbai Police. The Toybank team also posed for photographs with many other Cyclist teams at the cyclothon.

The Toybank concept was spread around many cyclists - a good Sunday morning spent well.”