Toybank had another joyous event with the kids at Niramaya Health Foundation!

Niramaya Health Foundation has been working for drop out children since two years, by establishing a Drop-In Center in the Deonar dumping ground area. The primary aim is to help them streamline their thinking by interacting with them and helping them understand basics of math, languages, geography and encouraging them to think creatively through arts of drawing and painting.

On the 10th of May, 2011 Toybankers all set with wonderful toys entered the Nirmaya centre at Govandi.
We played Pictionary and Dumb Shiraz with all the children and distributed the toys.

Here is what the Program Manager, Amruta at Niramaya Health Foundation had to say:

"When volunteers from Toybank visited our center, children were very much enthused with the new game that they taught the kids. It was a new experience for them and they liked it very much because of its quality of involving everyone in it. The game was “Pictionary”. A totally different concept for them, that made them imagine, think, asked them to be creative!! The distribution of toys by Toybank brought wide smiles not only on the children’s faces but their mommies too. Possessing a toy of their own is like heaven to them. All kids, small under fives and even children of 10 to 12 years of age received toys as per their ages. Board games were explained to the kids after the distribution. 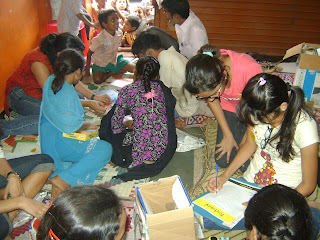 It was a joyous moment for them and asked everyone of us, when would these teachers come back again to teach us a new game? A fun filled day for children, the activities by toybank raised their spirits to the fullest! We are grateful to Toybank to have taken such great efforts to come over with their volunteers distribute toys to the kids in our Drop-in Center. "

Here's what our Toybanker Vishakha has to say about the event:

"As volunteers at the toy distribution event at Nirmaya health centre, we had decided to play pictionary and were very unsure of what the response would be. But to our surprise it turned out to be so much fun. None of these kids had ever played pictionary, but each one was as enthusiastic and willing to participate. Some of the kids didnt even speak hindi, only urdu, but it didnt stop them using their imagination and creativity in best possible ways. Some naughty kids also leaked the answer before drawing were completed. :)
Following the pictionary game of dumb shiraz was also played, with equal and rather more enthusiasm. At the end when we said that we are going to donate toys all the kids were jumping and screaming with joys! It was a pleasure to be a part of this event and gift the toys to these wonderful children."