On the 22nd of April, Toybankers from Bombay had an awesome time with the kids from Salaam Baalak! We had two simultaneous events going on for different age groups of children. 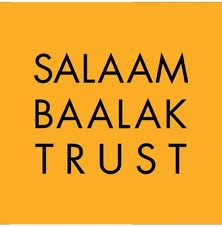 Here's what a first time volunteer Seshadri has to say about the event:
"Toybankers gathered at Umerkhadi Day Care Centre which comes under the Salaam Baalak Trust for a fun-filled interaction with the kids ranging from as young as 3years to 18 years.  This trust located  in the south of Mumbai, provides a holistic safety net of services catering to the individual needs of  street children covering from physical and medical needs to education, creative, social and vocational needs of children.  Farnaza and the group of volunteers assembled early enough for a briefing.

Basically 2 events were staged simultaneously, poems, story telling and the screening of message-based films  for the younger ones aged between 3-6 years. The kids were totally taken in by this concept that the volunteers Visakha and Farida had to plead the kids to stop so that we could go ahead.  After almost 2 hours the kids were presented with soft toys. The joy on their faces had to be seen to be believed. 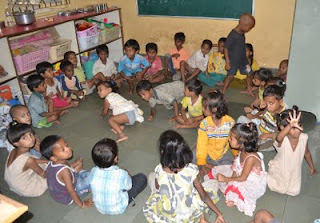 The second event was held simultaneously was for the elder group of 8-18 years who were divided into 5 groups.  The volunteers had collected lots of scrap material in the form of buttons, bottles, bottle caps, shoe laces, clothes, cardboard sheets, boxes, greetings cards, match boxes, safety pins, paper clips, newspapers, decorative material, toothpicks, hair clips and anything that could be put to some use.
These items were given to the groups and they were asked to let their creativity take over. One of the groups came out with a Robot! We saw that children can really come up with some fascinating stuff when there is no limit or any restriction on thinking. Finally these kids were also presented with some creative toys which we are sure would get them thinking.  A fascinating GOOD Friday and we came out learning so much more from these children."
Click here for more glimpses of the event! 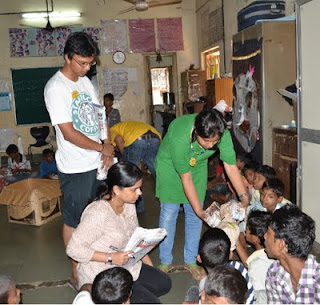 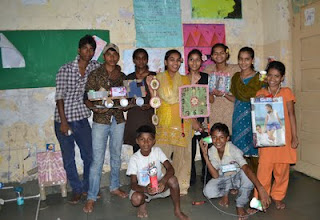