NGO India is back again! The second chapter of this large platform for NGOs to spread awareness and exhibit their merchandise was held at The Bombay Exhibition Centre, Goregaon, on the 14th and 15th of June. Toybank was once again part of this event with its own attractive stall in the “Market Place” of the exhibition. The stall was manned by Toybankers who explained the functioning of Toybank tirelessly to the hundreds that visited the stall. The stall also had a star attraction ‘Happy – The Fun Loving Clown’, who kept the people laughing and entertained throughout the day.


The possession of the stall was taken on 13th June in order to setup and decorate it. Ruta, along with a few other Toybankers took charge and decorated the stall which would’ve won or at least contested closely for the award of the best decorated stall if there was such an award. After a lot of hard work and overcoming the difficulties faced, all the walls were filled with wall hangings of different sorts to give a full picture of Toybank. The stall had a ladder on one side with each step depicting a different age group and a graduation hat on top to symbolically represent the work of Toybank. The motto of Toybank and a poster was also put up on the walls of the stall with soft toys hanging everywhere in the stall. The stall also had an LCD TV on which videos and photos of the work done by Toybank were continuously played. 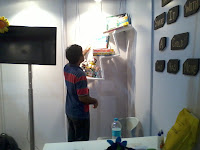 The first day of the exhibition was open for only corporates. The day began with the setting up of merchandise on one table and the other table being set up with the items for Scrap Magic. ‘Happy’ had made few sets of toys with scrap that could explain scientific principles to children in a simple way. There were set ups to explain the working of a mono-rail through magnetic levitation, a magnetic compass and the principle of converting linear motion into rotational motion. ‘Happy’ had also made a “Piggy Bank” in the shape of a pig using items that are discarded at home every day. The visitors to the stall were amazed by the simplicity of the setups. The Toybank stall also attracted the likes of Kajal Agarwal of Singham fame and many other people. In the afternoon, ‘Happy’ started taking rounds in the maze of stalls and spreading the laughter disease in every stall as other Toybankers continued talking to the people who dropped by the Toybank stall. The events of the day ended by around 6 pm and all the Toybankers got down to packing up everything that was outside. 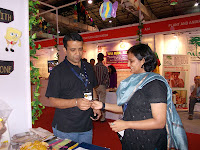 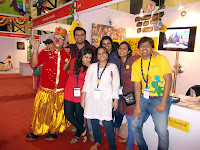 The second day of the exhibition was open to the public, but children below the age of 18 weren’t allowed. This proved to be a slight problem as the science experiments would have been more appealing to the children, but nevertheless there were many adults interested in this too. The exhibition was open to the public at 10 am and slowly the crowd started trickling in. ‘Happy’ wore a different costume today and was again the star attraction of the day. As he couldn’t finish exploring the whole maze of stalls which were more than a 100 the previous day, he got about moving in a different direction and was going on rounds for almost the whole day. The second day, being a Saturday, saw a few more Toybankers join us in the stalls and help out. Again, there were many different people who visited the stall. The exhibition proved to be a very helpful for Toybank as it helped to bring in many volunteers and contacts in various fields that would help us. The day ended with the packing up of all the items in the stall and taking photos with all the volunteers together celebrating the grand success. 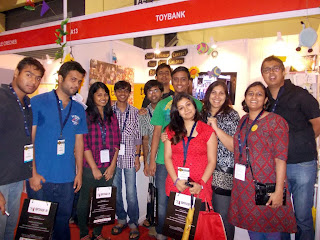