6 Toybankers set out to have fun with children from Khoj Foundation, a NGO working on upliftment and development of children living and working on the streets by connecting them to the main stream society.

As soon as all the children assembled, all of us sat down for a drawing and painting session for 30 mins. Soon there were colourful elephants, cars, trees, houses and Toybankers had a fun time engaging with the children! 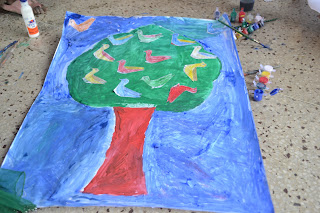 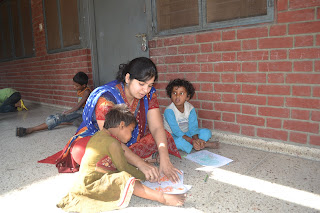 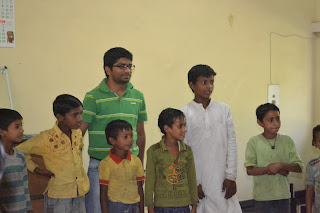 This was followed by a dance performance by the boys for a Salman Khan number. They were excited, happy and enthusiastic all through their performance. Post this we sang along a few songs and continued having fun. Our volunteer Jean engaged the kids in her amazing rhymes again! :) The fun event then extended to cake and toy distribution! 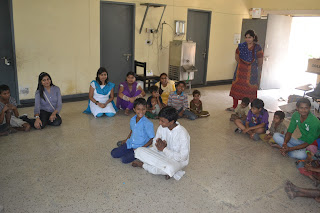 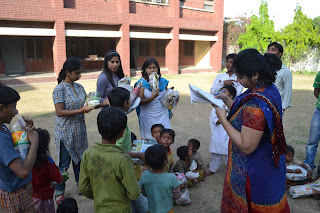 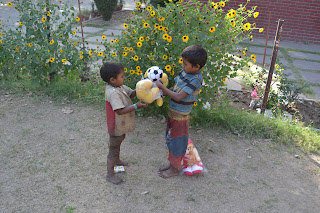 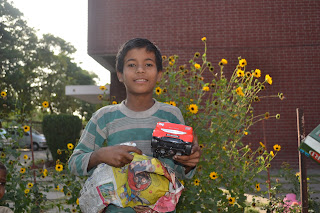 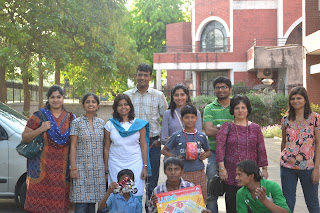 Here's an account of the complete event as shared by Khoj Foundation:

"It was a warm day on 21st April but the teachers worked hard to gather children from Ber Sarai to bring them to Prabhat Tara. About 50% of the children had gone to their villages for different occasions, however we were successful in gathering 31 children.

The children knew in advance that they would be getting toys that day and they were full of curiosity and with questions about the kind of toys Toy Bank would gift them.

The team from Toybank came around 2.15pm and they had no. of volunteers with them as well and soon sat down for orientation.

As usual, the children were first made to refresh themselves by thoroughly scrubbing with face with soap and water and washing their hands. They then formed a big circle and introduced themselves. The teachers then informed them about the activity of the day.

The youngest group of children sat down for drawing and painting. They drew no. of objects and figures and coloured them with crayons with teacher Savita.

The middle section of children sat down to do coloring with water paints on a huge figure of tree and painting birds on it with teacher Neetu.

The eldest section of children practiced on a song with the help of Jamshed and teacher Maddy. They were all getting ready to give a performance to the team of Toybank.

The team of Toybank soon joined the children during their activities and guided children.

The dance performance was given by the eldest section of children which everyone enjoyed. They were all made to form a circle again and Jean from Toybank sang number of poems in Hindi and English with the children.

Soon, it was time to have soft beverages and snacks and children gorged with delight and relished the cakes that were brought by the team of Toybank for them.

It was now time to gift the toys. The name of each child was called by the team of Toybank and a gift was given to each child according to his/ her age. The children could not contain their excitement to receive gifts from them and were thrilled to receive them and bragged about them among themselves and showed off to each other.

Toybank promised to gift more to them in the month of June’12.

Thank you team of Toybank, Neha and staff of Khoj for making the day such a memorable one for the children! "