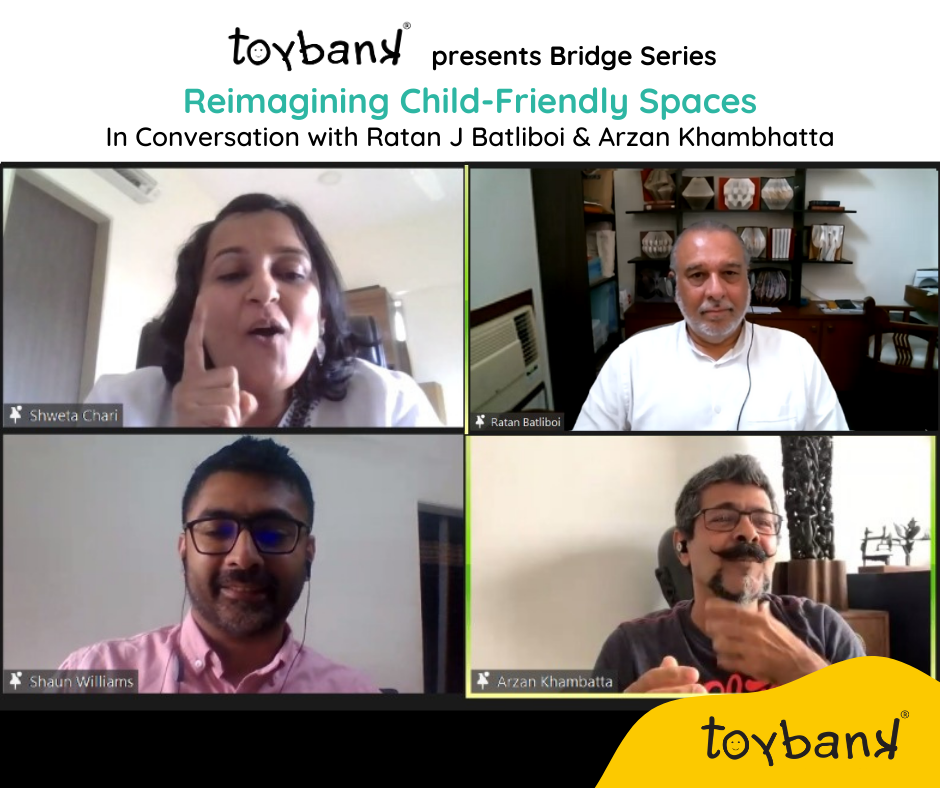 In the first webinar of the Toybank Bridge Series, Gen T: The Generation that Thrives, our panelist and Play2Learn Center child Prince Yadav expressed that the authorities need to facilitate opportunities for children to have easy access to learning and play. The thought set the tone of our second webinar, Reimagining Child-friendly Spaces.—In Conversation with Ratan Batliboi and Arzan Khambatta.

On December 10, to observe Human Rights Day and remind people of children’s Right to Play, eminent architect Ratan Batliboi, artist-sculptor and an architect himself Arzan Khambatta chatted with Tobank CEO and Founder Shweta Chari about why children need to be included while creating child-friendly spaces.

Moderated by drama teacher, actor and acting coach Shaun Williams, the webinar started with calling out why play is so important. Shweta said, “Play is like the air we breathe but never pay attention to. If kids don’t play, what kind of people will they grow up to be and become part of society?” She added that unless a child’s mind is stimulated, it won’t process anything. Humans are always playing but as we grow older, play is dismissed as pastime and frivolous. Shaun pointed out that play helps children build friendships, culture and community, which is equivalent to nation building. 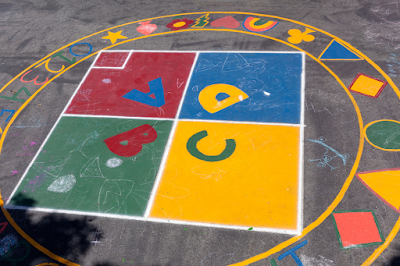 Just like play is a natural activity, Ratan emphasized that play areas must allow for children to be free-range. They needn’t have swings, slides and other such additions. “Children will always find a way to find the play in that space. Let imagination free and kids will make something out of nothing,” he says. “It’s not about the play space but the mental space and childlike attitude. We enforce our adult conditioned approaches to decide what colored slides, swings or trapeze children would like but who are we to decide?” Similarly, over-designing places that overstimulate is conditioning and boxing in a free spirit.

Arzan said that as kids, he and his companions used to be left out in the open with just one tree and one shade somewhere. “Throughout the day we would be devising games and reinventing things to suit our play needs,” he reminisced. In Shweta’s opinion, it’s unfortunate that we have to make extra efforts to provide a play environment for children and it doesn’t come naturally to us. “In the absence of such play opportunities, we don’t even process that something is missing. The need, therefore, is to get play into our consciousness,” she states alluding to Toybank’s Play2Learn Center model where existing spaces are transformed into play spaces. 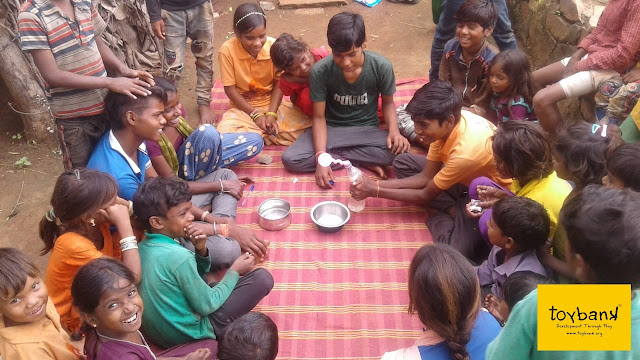 What constitutes a play environment?

Instead of embellishing the space with structures and strappings, one has to look for open air with good lighting, shades, security and landscape spaces, Ratan suggested. Leave the control out of the equation and let the children be on their own. Instead of being structured all the time, they will learn to use their imagination, Arzan added. To facilitate such areas, keeping the dearth of spaces in mind, Ratan opines that instead of expecting the government or the state admin to give us what we want, we must approach them for permissions to use spaces differently.

The panelists concluded that we need to inculcate play as a state of mind that lasts beyond the first three years of children’s lives. Play should be so normalized that there shouldn’t be the need to work on it as it is the most basic and simple yet powerful thing.