Play for Transformation: Toybank Round Table Discussion Part I 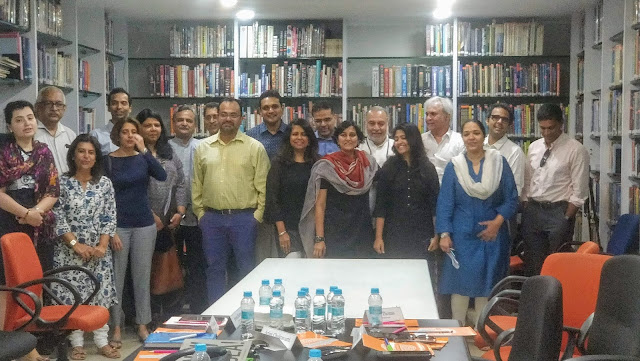 The need to make Play mainstream and an integral part of society can never be emphasized enough. After all, play improves the educational, health and employability outcomes for children. Driving on this notion, Toybank hosted its first-ever Round Table, to discuss ‘Play for Transformation’ and how to make it mainstream. The session was attended by Toybank’s trustees, board members and supporters. The first questioned posed was whether the concept of Play is understood and prominent in India.

Before incorporating Play in a child’s lifestyle, one needs to understand what is Play. Notions like it is creativity and a kid creating something is playing restricts its definition. If we redefine play, it may have a greater impact on children. The panel reckoned it’s a state of mind that can give you clarity of thought and minimize frustrations, which can be implemented in different aspects of life.

WHAT’S PLAY-GUING PLAY?
Play has been mainstreamed only in Scandinavian countries that have recognized its power. In India, it’s still as sidelined as mental health. The reason for play being just tangential indicated several issues it’s dealing with.

It comes at a cost
Even though the right of every child, Toybank Advisory Board Member Vivek Jhangiani and CEO at United Toys, President of The All India Toy Manufacturers Association (TAITMA) and Ambassador for Value of Play in the Indian toy industry, pointed out that play is accessible only to the affluent. There’s a considerable gap between India and the world when it comes to the commercials of play. "In India, the per capita of games, toys or sports-related products on a single child does not cross $3 a year, as opposed to $300-400 in the US. The mindset of an average Indian towards play comes partly from limited resources," Vivek states.

"In India, the per capita of games, toys or sports-related products on a single child does not cross $3 a year, as opposed to $300-400 in the US" — Vivek Jhangiani, Toybank Advisory Board Member & CEO, United Toys

Advisory Board Member Ratan Batliboi, Board Chair and Hon. Trustee at CRY, further stated that we do not need props, money, space or urban planning to play. It’s an innate behavioral shift that needs to transpire. The critical issue is how one can communicate the long-term change in a parent body and students.

Play v/s sport
Parents consider academics and extra-curricular activities as important and play does not figure in the scheme of things unless it’s a sport that can be taken up as a career. As key enablers, it’s important that parents understand why play is important. The fun of participation is initiated in a child through play, along with the joy of winning and learning from defeat; later come personality development, extroversion, etc. Learning to play with others and making new friends help make better kids. However, India is yet to realize these benefits; unlike Africa, which is comparable with us in terms of poverty and other issues. But they have a culture of sports that brings them out of their miseries and makes them better athletes.

We do not value play
The ecosystem for play is not quite conducive in India. Policies, lack of urban planning as well as encouragement by parents to send kids to play are some other issues. Toybank supporter Sumangali Gada, Founder and trustee at the PRAJA Foundation, reasoned that even if we get the why of play, we do not value it. "Though we want children to learn empathy, critical thinking and such values, we are at sea about how to actualize these qualities. There are barely any schools that walk the talk and espouse the values that play entails," says she.

Performance over play
One of the primary reasons why children do not get enough benefits of play is competitiveness. Nimesh Sumati of Caring Friends says we need to urge parents to not make kids compete but just play. This tendency has percolated to the lower strata of the society, with children facing peer pressure, with performance given more importance than play.

Lack of urban planning and parents encouraging children to play are other issues preventing the mainstreaming of Play.

Play is an add-on
Taking Maslow’s Hierarchy of Needs into consideration, with basic issues like food and literacy that India is faced with, play does not get the prominence it deserves, Samonnoi Banerjee, Bain Capital, Managing Director in the Healthcare and Technology, Media & Telecommunications Verticals stated. Play will always be an add-on. It will always be equal to recreation and not a conscious mechanism of development. Unless it is brought into people’s consciousness through a communication or a big campaign like Swachh Bharat, we may never fully comprehend its importance. He further observed that we are looking at a large-scale impact. Accessibility and affordability can be solved through some other ways if we admit that play is important and makes a difference.