A dot may seem like the most minimal symbol but at the Kala Ghoda Arts Festival 2020, this year’s 'DOT' theme bore a number of meanings. On February 7th, our student volunteers from Aditya Birla World Academy (ABWA) conducted a workshop for over 70 children, from Toybank's Play Centres, to paint pencil cases. The students combined traditional art with the theme of dots to create Gond paintings (a folk and tribal art form practiced in Madhya Pradesh by the largest tribe of the same name). 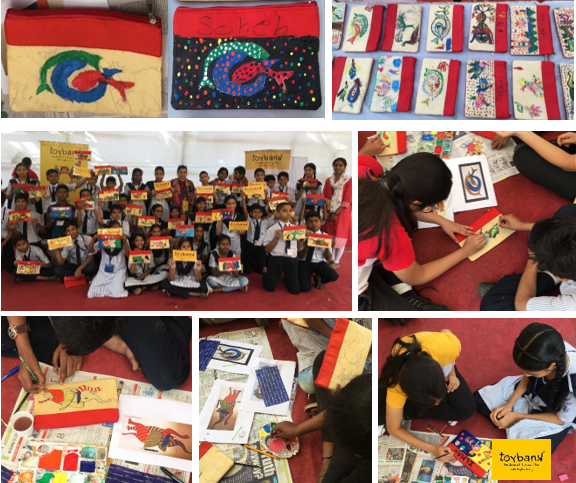 This was a new experience for our children, exploring an art form they otherwise wouldn't have known. It was wonderful to see our volunteers and the children learn from one another through the medium of play and worked collaboratively on a single project.

The children had reference images to prompt them with ideas of what designs they could paint, but they instead let their imagination run wild and explored their creative skills. One of them thought the reference photos were extremely difficult to draw, so she used her imagination to draw something else. Another girl didn’t want to use any of the primary colors, so instead she made shades of her favorite color, pink, and added hue to her art.

A child selected a reference photo and started to trace it on to the case with carbon paper. Mid way he felt helpless when a messy mark got onto the case. His teammate told him not to feel disappointed and to continue completing his idea and that she would help him fix it later. He trusted her and finished it. At the end, she painted over the messy marks and his design looked great!

The event, on a whole, was exciting for all the students as they learnt a new art form and interacted with each other in a way that they otherwise wouldn’t.