“Blessed are those, who have a calling” - That is all I felt when I said yes to Chozin, who wrote to me in December 2018 to request for some toys and games for the rural primary schools in the Nyoma block of Changthang, Ladakh. Within a span of 15 days, I was able to collect some 200 educational toys & games that were immediately transported to those high mountains by the student volunteers of SAVE - The Student’s Association for Village Education, Nyoma.

Within the next few weeks, the mountains got buried in snow and some of the volunteers traveled down to the plains – that’s when I met two of them, Thinles & Chozin. Over a steaming plate of chai & samosa in the middle of Delhi winters, I could feel the energy that they carried within. Even though they had an option to live in these comfortable cities, yet they wanted to head back & give back to their land and their people. Every word they spoke was full of hope & positivity. They were confident that whatever they wish for will happen – It’s just about ‘when’. The truth is that somewhere I saw my own youth reflection in their eyes and hearts. They had a simple wish to introduce the game of football to the children of Nyoma and asked me if I could help- And I said ‘yes’ again! 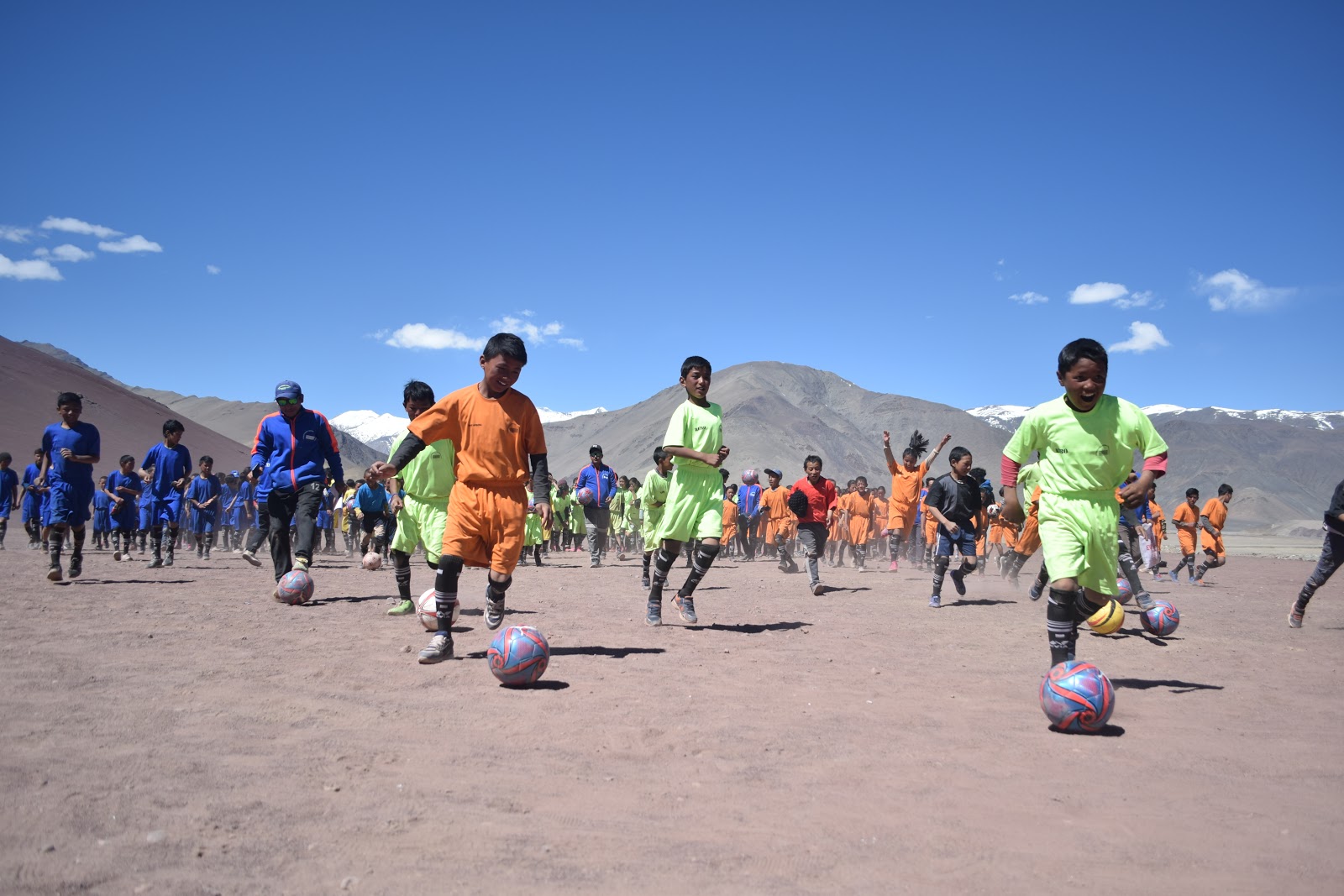 I had no idea how to go about it. My own children had participated in a few tournaments but I certainly never thought of organizing one myself. However, as a Toybanker, who has seen the magical power of play revealing itself many times in the last 10 years, I knew that this too is ‘possible’. I went to a friend, who runs a sporting firm called Volano - also an old supporter of Toybank. I understood from her what all will be needed & without my asking, she came on board. I started listing down names and messaging a few around me, who could guide or help. Magically, they all said ‘yes’!

Meanwhile, Thinles was back in Leh and was talking to some of the SAVE members, who were interested in sports themselves, and could possibly coach the kids. 10 of them agreed and made space in their calendars and went out for a first round of the villages to ask the children if they were truly willing to make the effort. Everyone said ‘yes’! 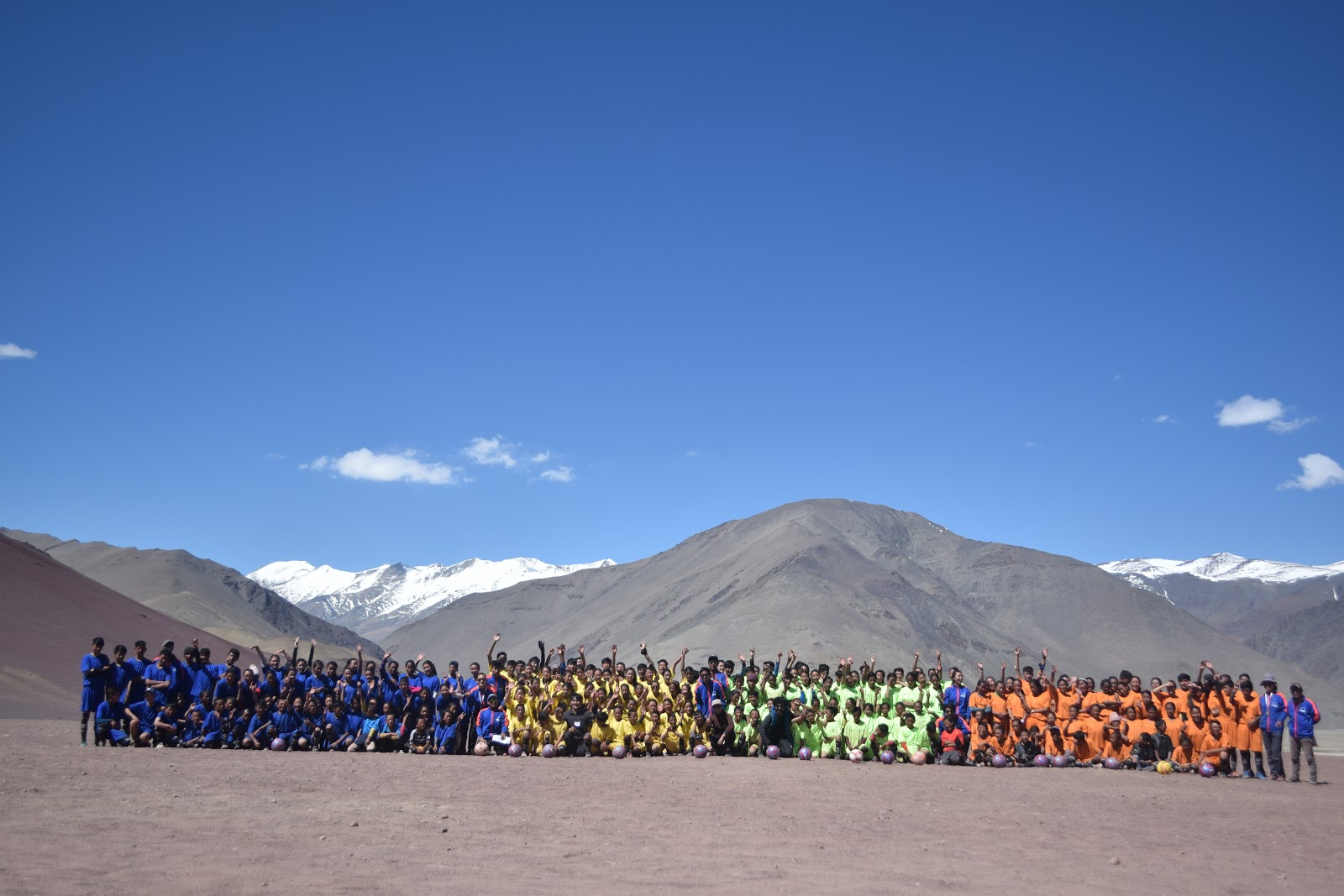 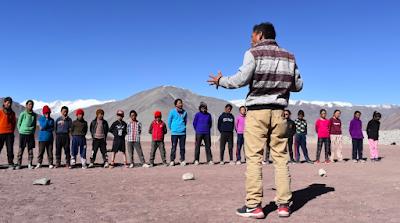 When we sat down with the coaches, Thinles & I realized that we will have some 300 plus children from 6 different villages. The initial estimate was for a 100! Again as a Toybanker, I couldn’t say no to the children, who wanted to play. So, I started looking for more resources – balls, practice equipment, nets, shoes and funds to provide boarding, lodging & food for the children & volunteers during the proposed tournament. We initiated a crowd funding that received a great response and then came the sponsors, Bata, NIVIA, Adventure Sports Cover, AVA & Puma who not only gave the material but also ensured on-time transportation from various cities.

The SAVE coaches braved the chill and even in near-freezing temperatures, started training with the children, who were ready to do anything for more ‘playtime’ with a football. One of the biggest achievements was the fabrication & transportation of four heavy metal goal posts, all the way from Leh to Nyoma.

This was certainly going to be one of the biggest sporting events that the block had ever seen, and with a couple of hoardings around the Nyoma town, the excitement of ‘the game’ was making its way into the hearts of the village men & women. They all heard that there are more number of participating girls than boys- was that true? That the children are going to get a permanent play field in the town – was that true? That big companies are sending clothes & shoes for the village children – was that true? That a celebrity singer was coming to entertain all of them –could that be true as well? But by the way, what is this game of soccer, anyways? 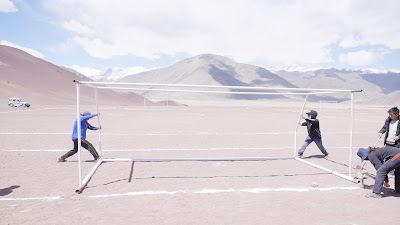 Finally, as we came closer to the date, almost 100 SAVE volunteers got into action. Everything was being done by hands – from the clearing up of the fields, setting up of the tents in those stony grounds and the painting of the flags & banners. Most of them heard about Toybank for the first time but were ready to work tirelessly to give the ‘right to play’ to the children of their villages – something that they themselves had missed in their childhood. The energy was spreading fast. The fields were prepared – which in Nyoma means the removal of about a thousand stones - big and small. The food & living areas were being set. The logistics & cultural teams forgot looking at their clocks. And yes, the coaches & their 24 teams with 320 children were all set! 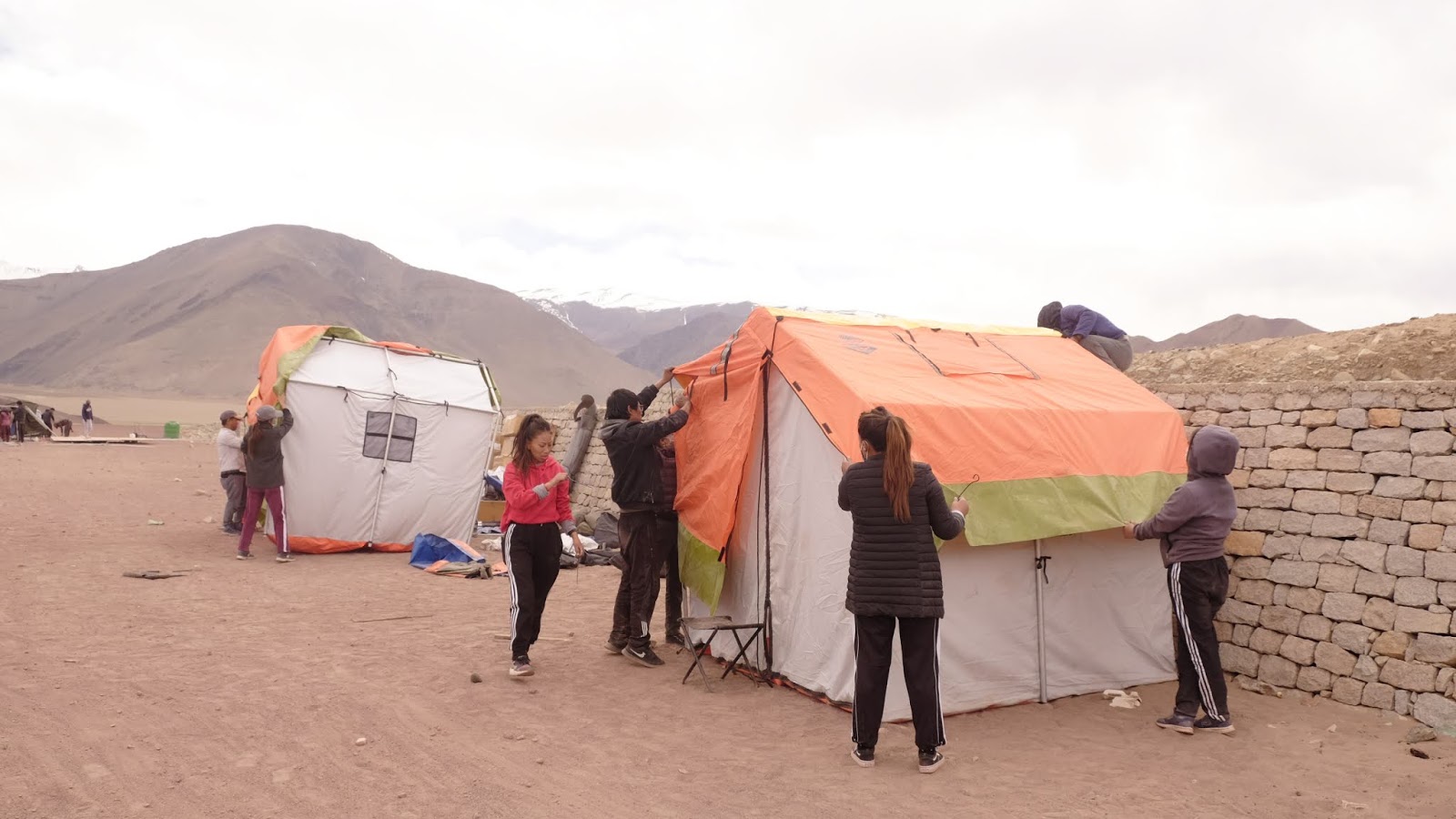 Closer to the D-day, a team of 5 photographers showed up with their super cams. Four of them were the local youth and one flew down all the way from Mumbai, the moment he heard the name of ‘Changthang’. I was more than delighted as now I will have something to show all the sponsors. Otherwise, there is no internet connectivity there. 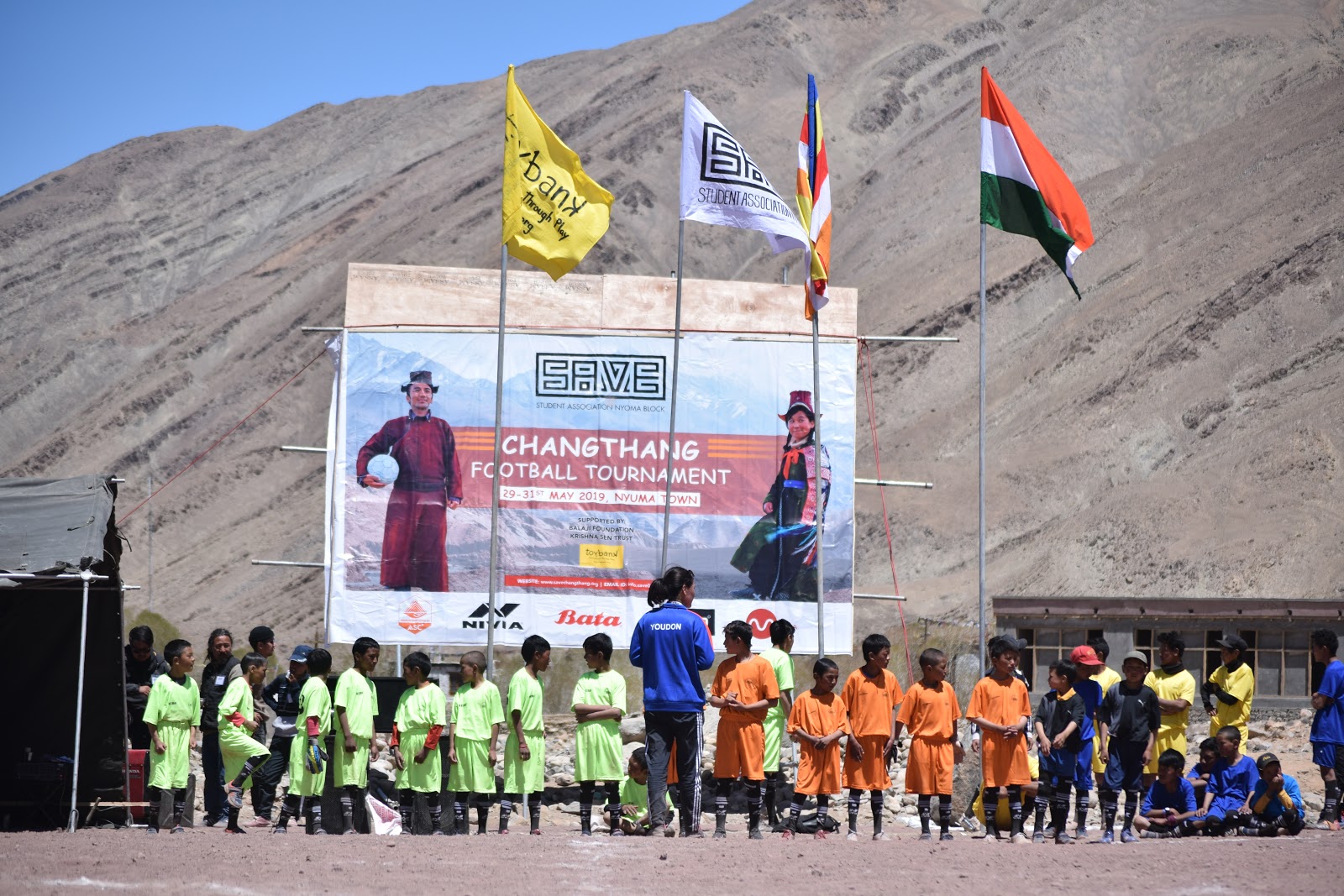 When I reached the field – I realized that this is probably the highest ever that the Toybank flag has fluttered, at an approx. 14000ft above the sea level of Mumbai. Speaking of that, we even had a high altitude medical rescue tent, along with an ambulance & a doctor, ready at the field.

Finally, I heard the music that my ears were waiting to hear - the sounds of the children running towards the field. And then the joy and excitement in their eyes, when they saw the new balls, new clothes & shoes. The field that was looking absolutely barren a week ago, was alive with smiles & play and within minutes, they all changed into their new uniforms and were blooming like flowers. Who could say that this is in the middle of a cold desert?

The head coach Skalzang, blew the first whistle and launched the first match. He had drawn a very tight schedule for the next two and a half days. The matches of the boys’ and girls’ teams ran parallel in the two fields, without any breaks. 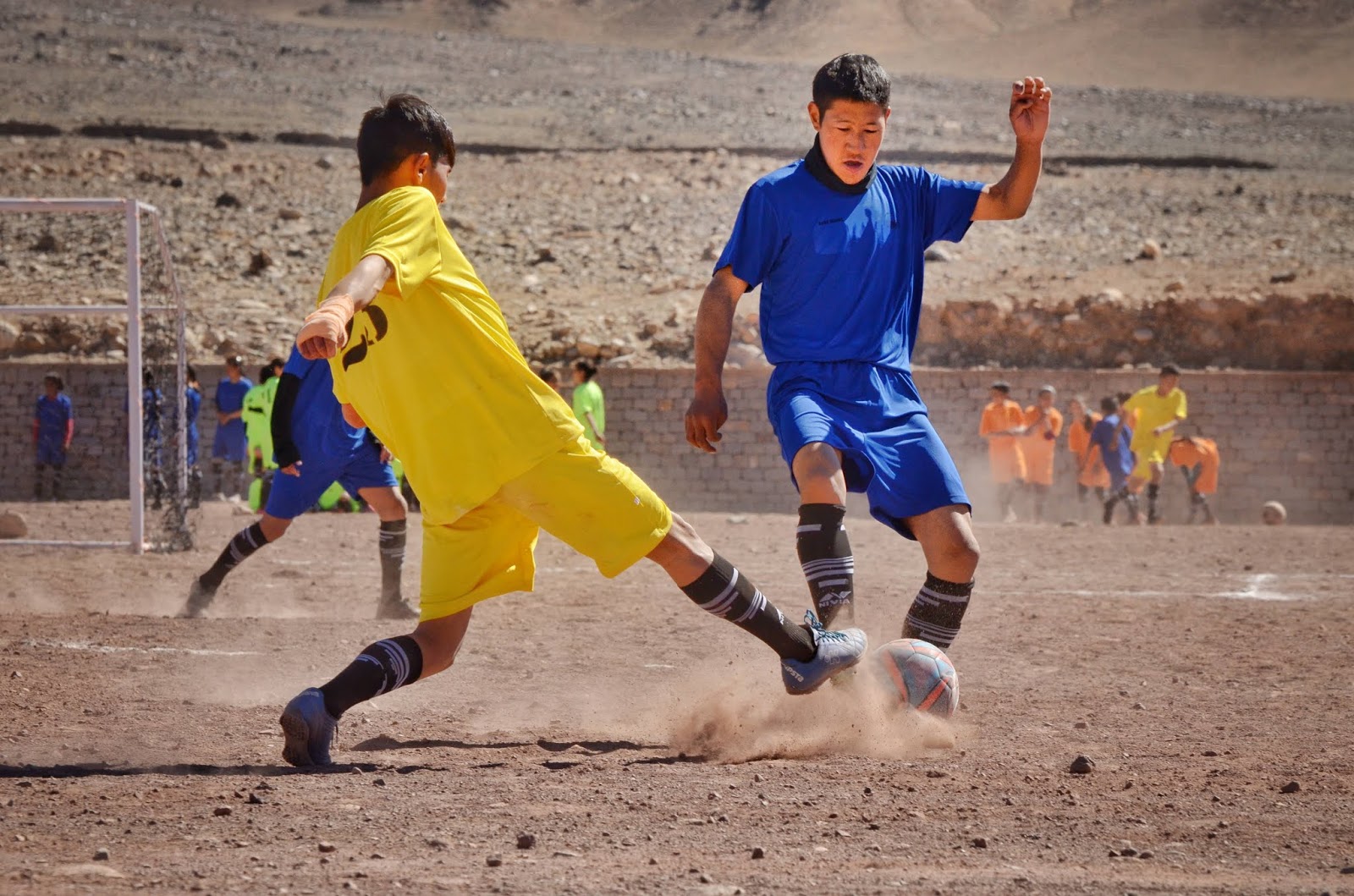 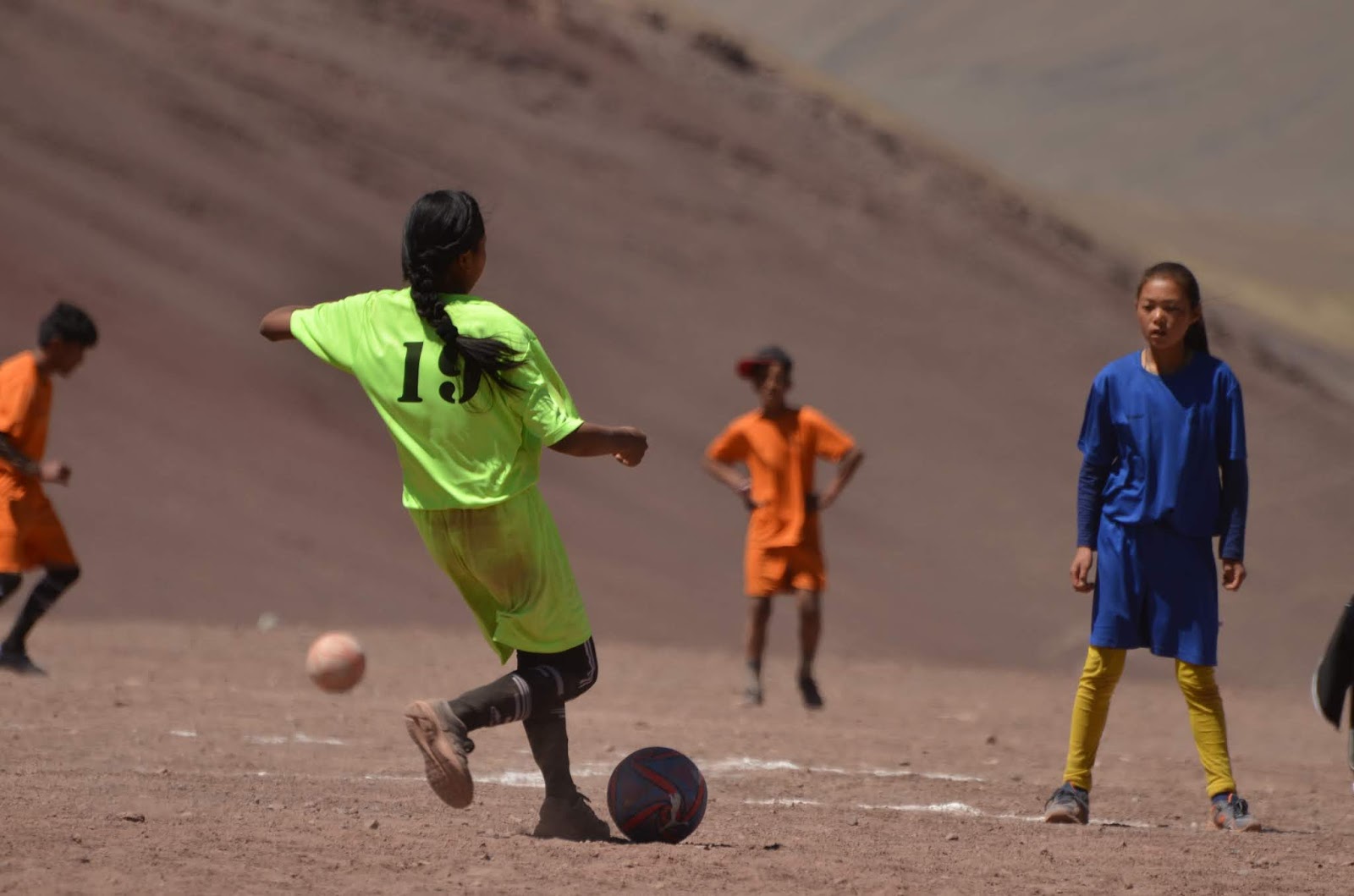 Some snacks & water were served on the field itself. No one was allowed to leave till coach Skalzang blew his last whistle of the day. I initially thought that it was quite harsh but around noon, I understood why he did that. DUST STORMS!!! The kinds that we can’t even imagine in our cities. In Changthang, if you don’t finish your day’s job by 2pm, the winds will ensure that you go back empty handed. So the key is to start early, pray for a strong sun to warm up the morning and then keep at it without looking away, till the first strong winds get you. 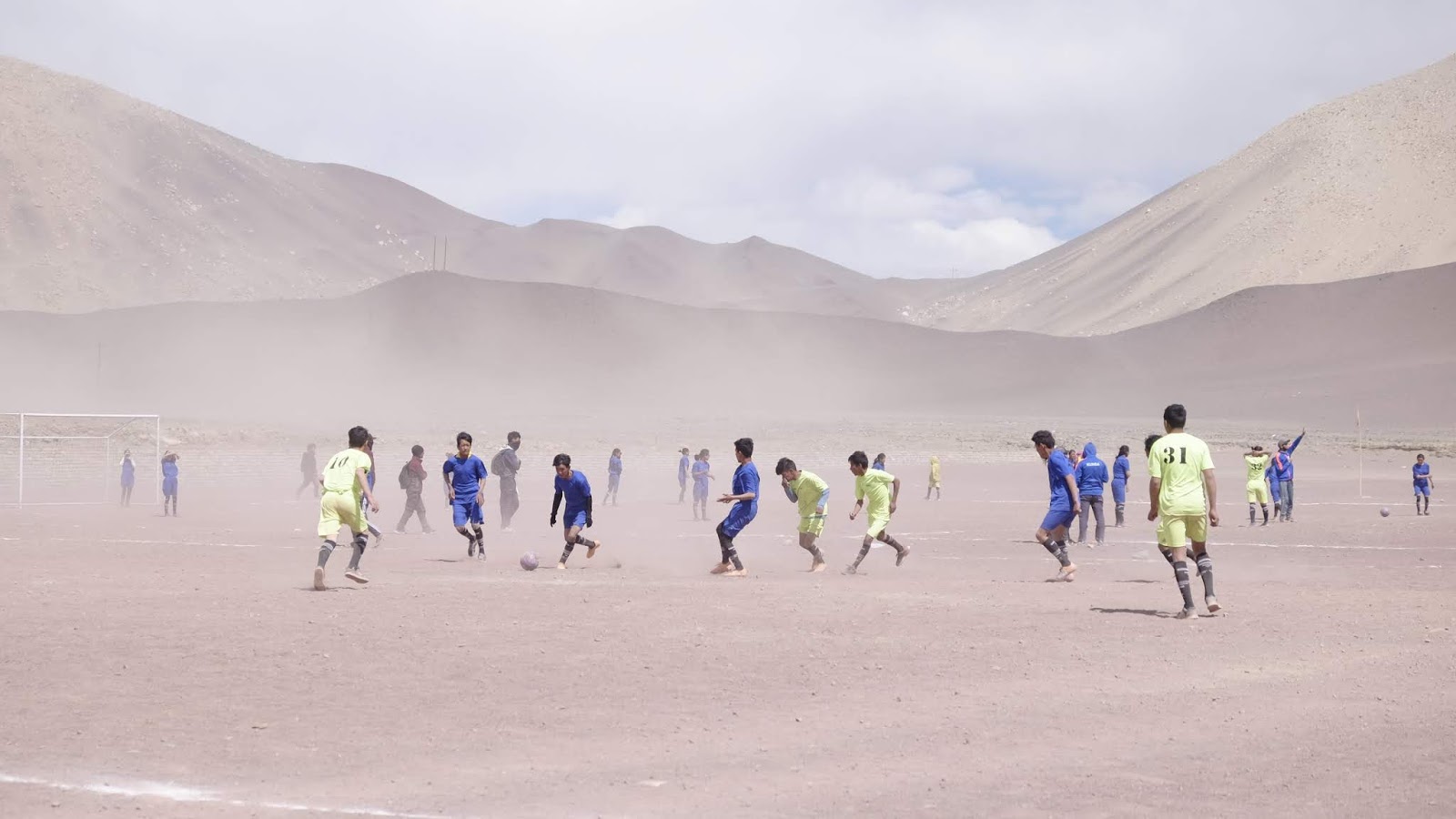 As the matches progressed, I could see the strength & the vigor that is in the very soul of the Changi children. They would fall and hurt themselves on the hard stones but get up and get after that ball without even shaking off the dust! They would not take their eyes off their target, even when the strong winds would come onto their faces. They would not complain even when though we ran out of water, while they were panting to get two sips. Most of them were new to soccer but one could compare their kicks & dives to those of the FIFA players. After all, don’t forget that this is the bloodline of the Changpas – the nomadic tribes, who have been living in one of the harshest topography of our country.

It was only after the match-day was over and when you would see them sit with their dinner plates at the dining hall that you would realise how much energy they must have spent. Again thanks to all the SAVE volunteers & crowd-funders, we were able to provide some nutritious meals and drinks to all these children on all the three days. The entire food preparation and serving was done in an environmentally safe manner, with absolutely zero use of plastic. Ah! Did I forget to mention that after Buddhism, the second religion for the Changpas is ‘Love for Environment’. 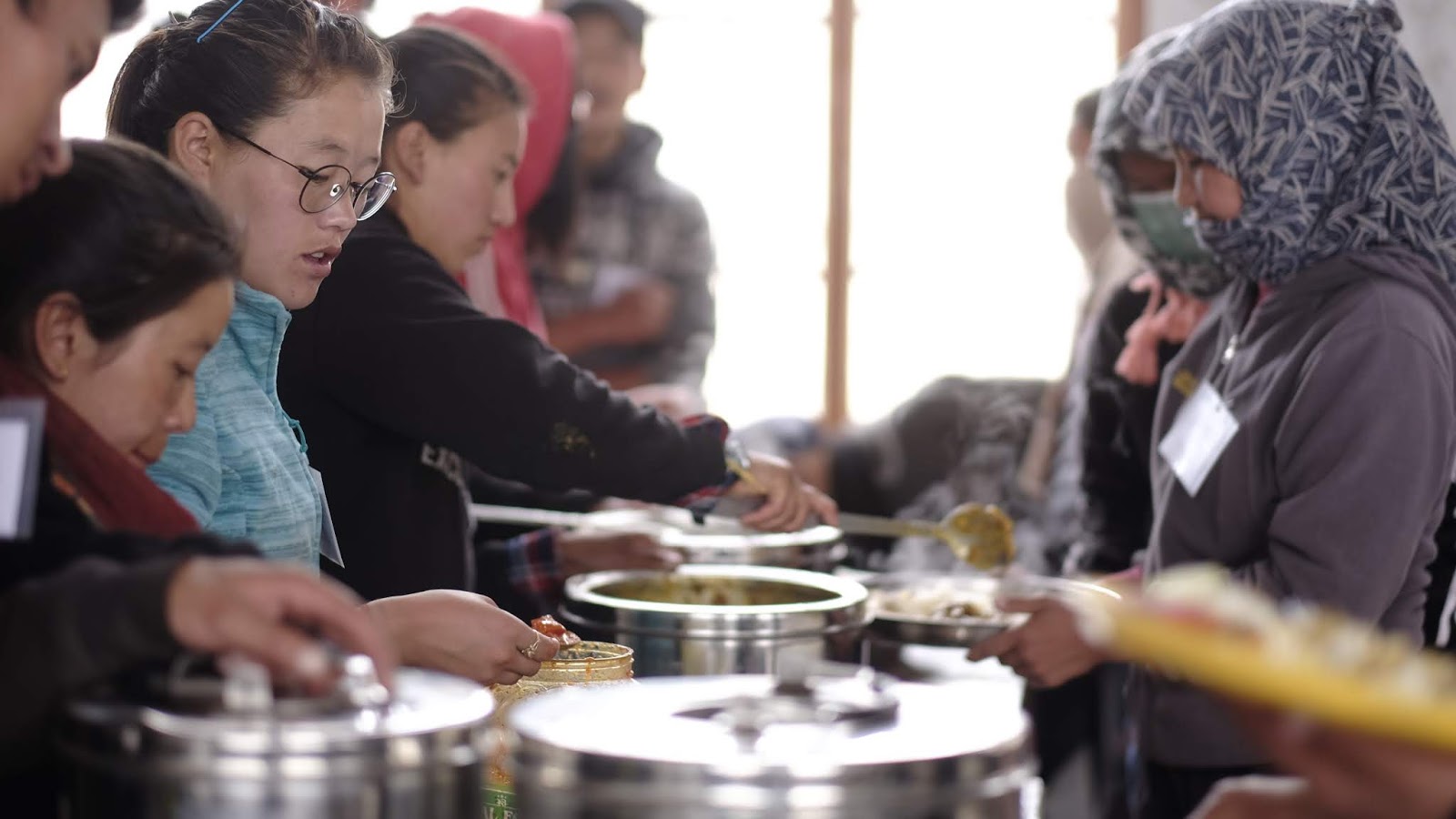 And if I have to write a third one, it would be ‘singing & dancing’. Every night there was a cultural program organized by the SAVE volunteers for all the villagers in the block. And to support them, there were these celebrity singers, ‘Faizal Khan & Sam’, who proved to be dream come true for many people in that district. Faizal & Sam also spent some time with the children on the side of the field, motivating them to work hard & play hard. 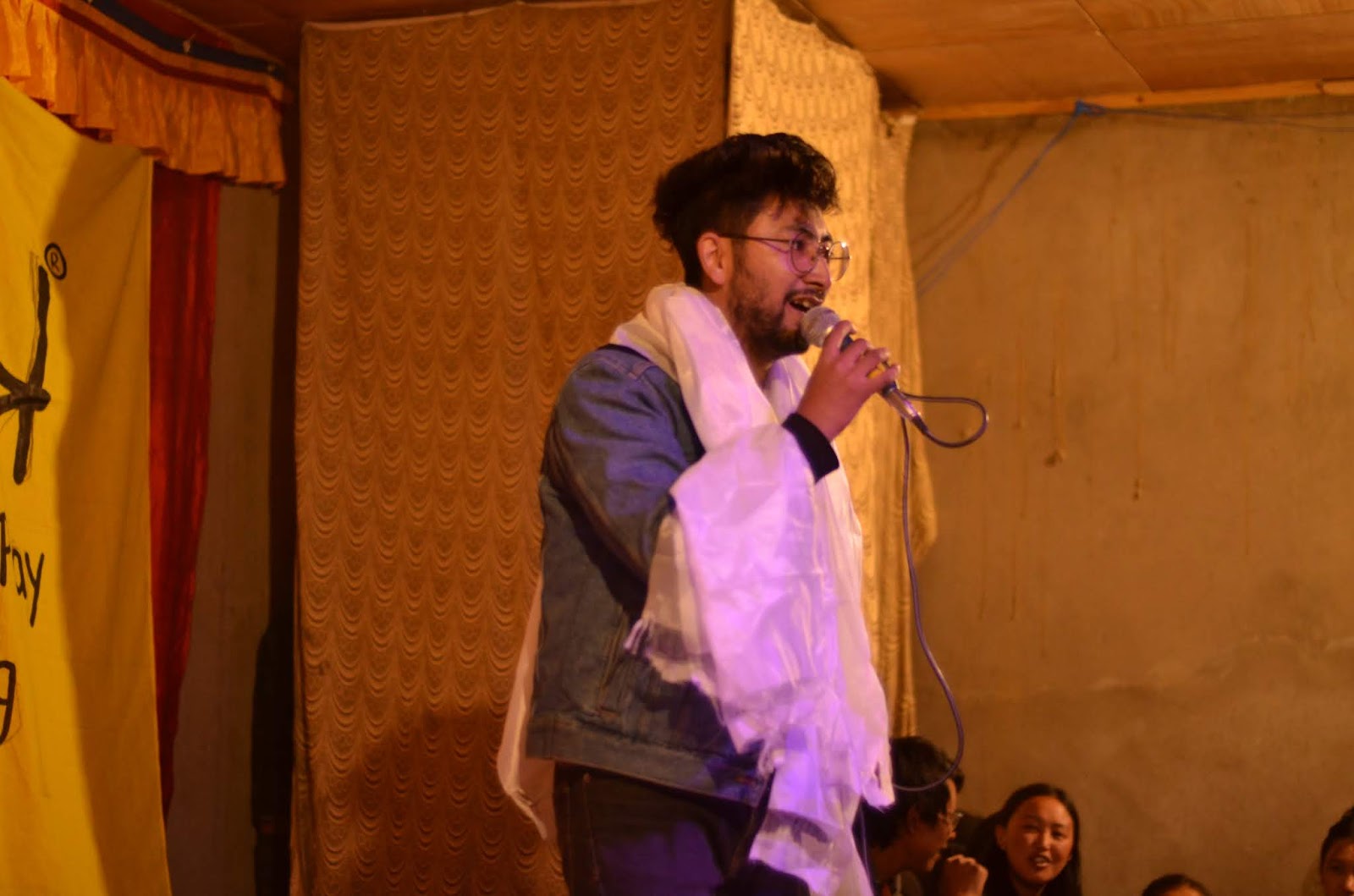 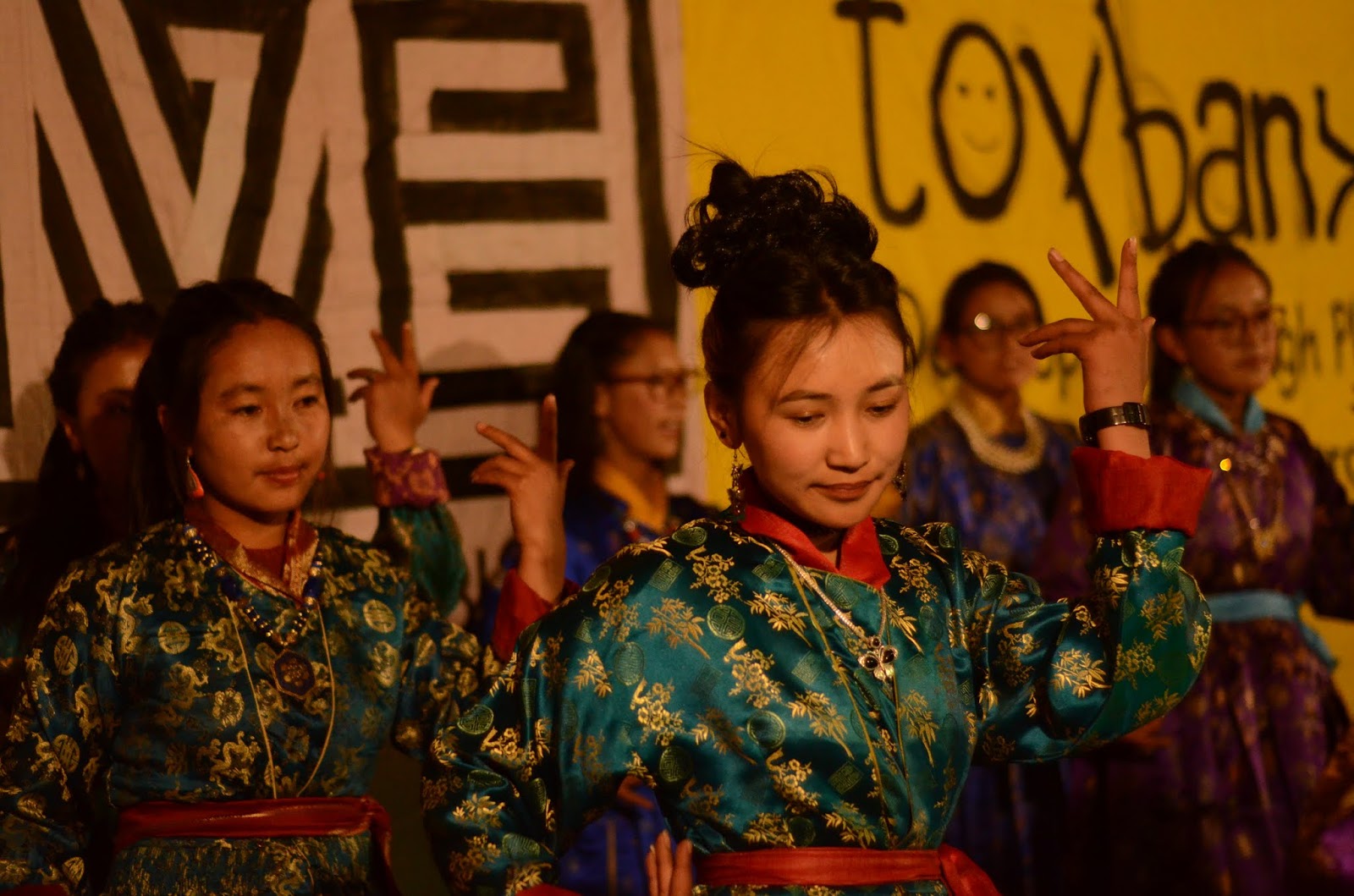 One other person, who ensured that the children take away much more from this tournament was Tejas, the freestyle footballer, who represents India, internationally. Tejas spent two full days running a football clinic at the field, where he taught and was able to train many children on the importance of balance between the mind and the body. 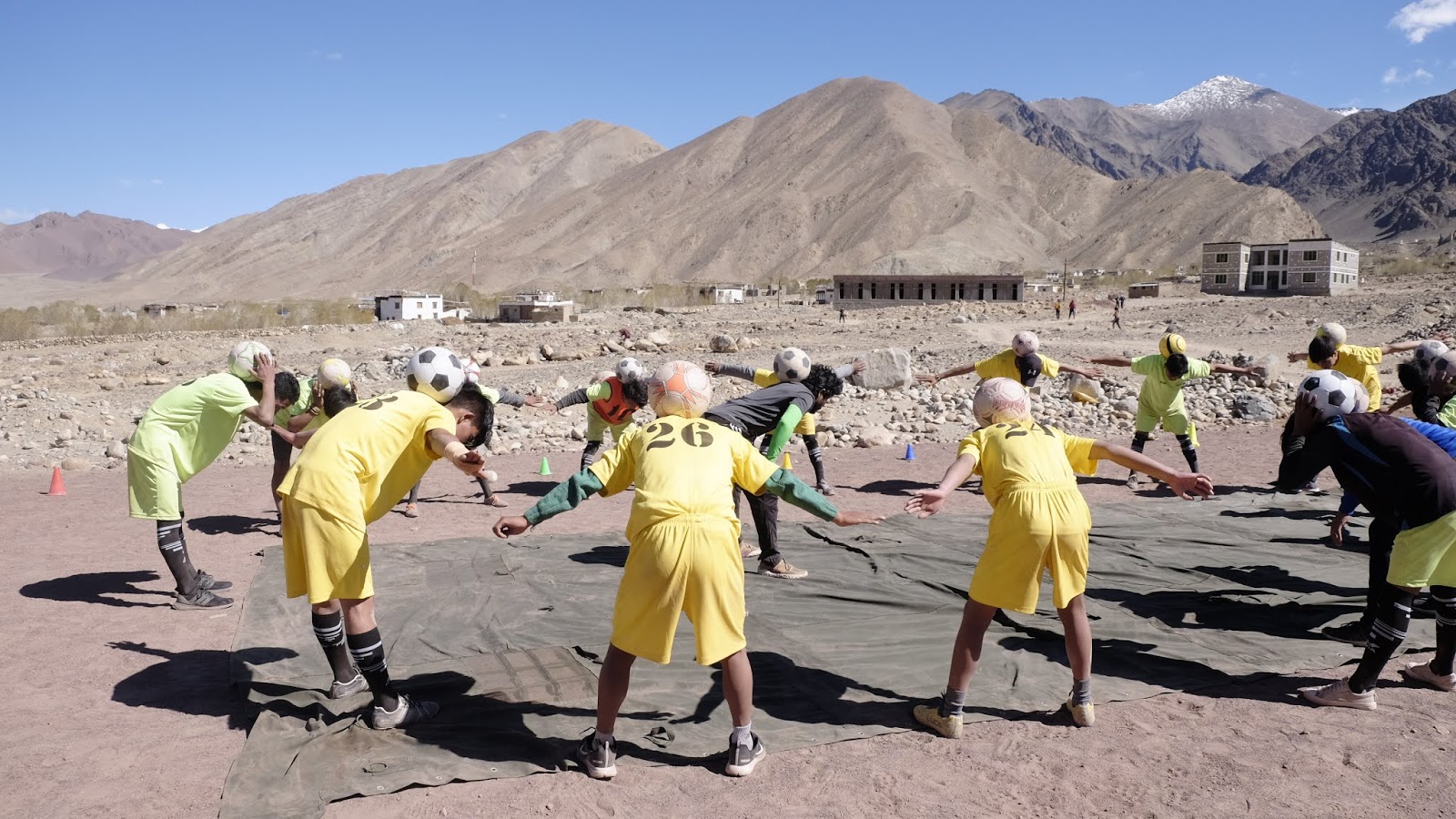 The last day saw many villagers plus important dignitaries from the region, arrive to see the final matches. They were all amazed at the super professional organization of the event by the volunteers of SAVE, and congratulated the zeal and enthusiasm with which everyone had worked, and the powerful inspiration from ‘Toybank’, which indeed has moved those mountains. 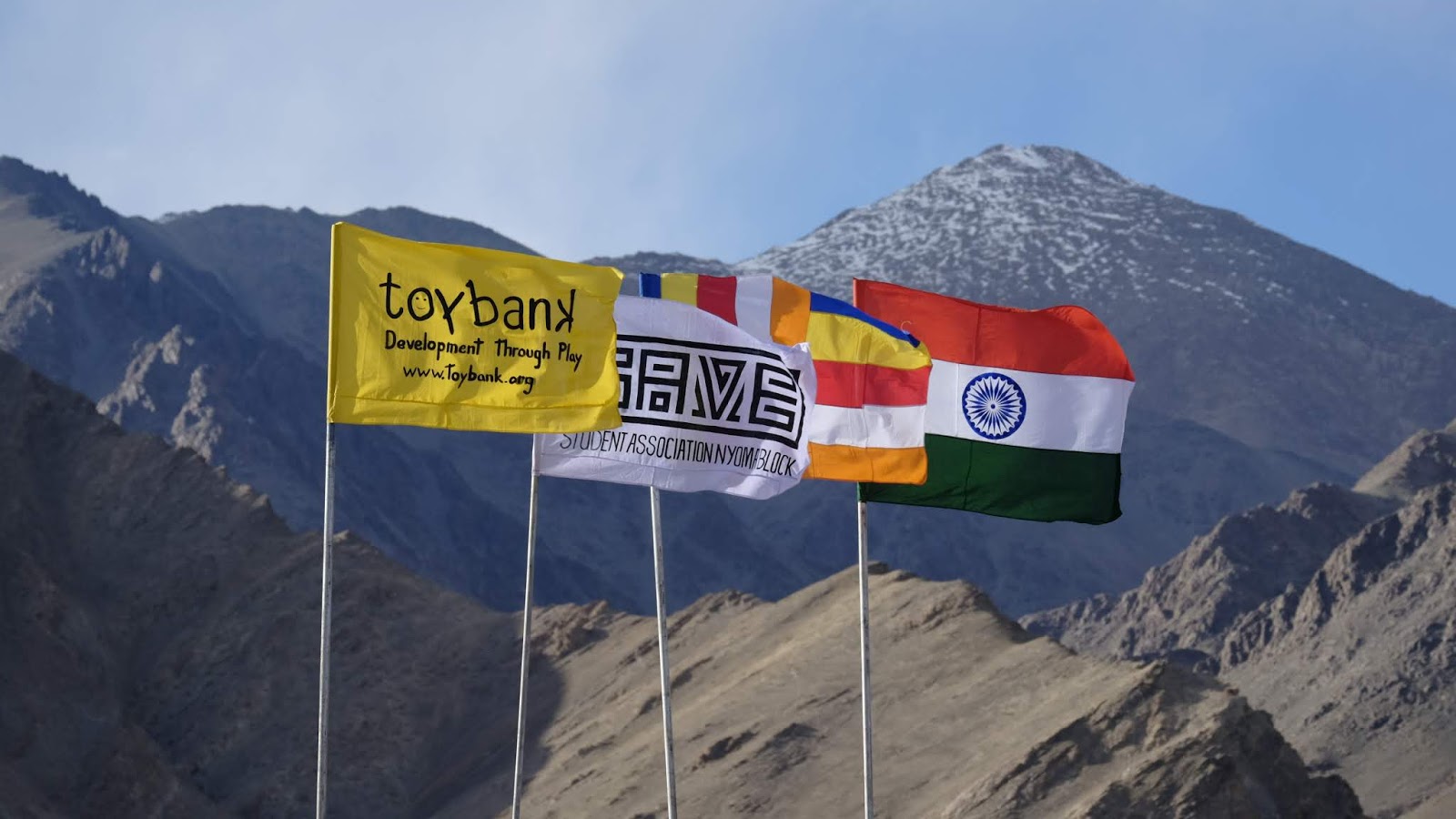